The National Hydrological Monitoring Programme (NHMP) was started in 1988 and is undertaken jointly by the UK Centre for Ecology & Hydrology and the British Geological Survey. The NHMP aims to provide an authoritative voice on hydrological conditions throughout the UK, to place them in a historical context and, over time, identify and interpret any emerging hydrological trends. Such information is essential for improved water management strategies and its dissemination helps to increase public understanding of hydrological and water resources issues.

This is accomplished through regular monthly and annual bulletins, occasional reports on floods and droughts, and engagement with the media. Hydrological analysis and interpretation within the programme are based on the data holdings of the National River Flow Archive (NRFA; maintained by UKCEH) and National Groundwater Level Archive (NGLA; maintained by BGS), including rainfall, river flows, borehole levels, and reservoir stocks.

The NHMP is run with the cooperation of the Met Office, and the principal Measuring Authorities of the Environment Agency (England), Natural Resources Wales, the Scottish Environmental Protection Agency, and for Northern Ireland, the Department for Infrastructure - Rivers.

The NHMP depends on the active cooperation of many data suppliers. This cooperation is gratefully acknowledged.

Rainfall data are provided by the Met Office.  To allow better spatial differentiation the rainfall data for Britain are presented for the regional divisions of the precursor organisations of the EA, NRW and SEPA.  The areal rainfall figures have been produced by the Met Office National Climate Information Centre (NCIC), and are based on 5km resolution gridded data from rain-gauges.  In addition to Met Office rain-gauges, the majority of the full rain-gauge network across the UK comprises rain-gauges operated by the EA, NRW, SEPA and Northern Ireland Water.  The Met Office NCIC monthly rainfall series extend back to 1910 and form the official source of UK areal rainfall statistics which have been adopted by the NHMP. The gridding technique used is described in Perry MC and Hollis DM (2005)*, available at https://doi.org/10.1002/joc.1161.

Long-term averages are based on the period 1971-2000 and are derived from the monthly areal series.

The regional figures for the current month in the hydrological summaries are based on a limited rain-gauge network so these (and the associated return periods) should be regarded as a guide only.

The monthly rainfall figures are provided by the Met Office NCIC and are Crown Copyright and may not be passed on to, or published by, any unauthorised person or organisation.

The Hydrological Summary and other NHMP outputs may also refer to and/or map soil moisture data for the UK.  These data are provided by the Meteorological Office Rainfall and Evaporation Calculation System (MORECS).  MORECS provides estimates of monthly soil moisture deficit in the form of averages over 40 x 40 km grid squares over Great Britain and Northern Ireland.  The monthly time series of data extends back to 1961.

River flow and groundwater level data are provided by the regional divisions of the EA, NRW, SEPA, the DfIR and the Northern Ireland Environment Agency. In all cases, the data are subject to revision following validation (extreme high and low flow and level data, in particular, may be subject to significant revision). The NRFA and the NGLA provide the historical perspective within which to examine contemporary hydrological conditions.

Details of reservoir stocks are provided by the Water Service Companies, the EA, Scottish Water and Northern Ireland Water.

Some of the features displayed on the maps contained in the reports are based on the following data with permission of the controller of HMSO:

All rights reserved.  Unauthorised reproduction infringes crown copyright and may lead to prosecution or civil proceedings.

The NHMP uses a subset of the NRFA gauging stations, NGLA index wells, and reservoirs for its analyses.  The map below shows these sites, alongside rivers and major groundwater aquifers: 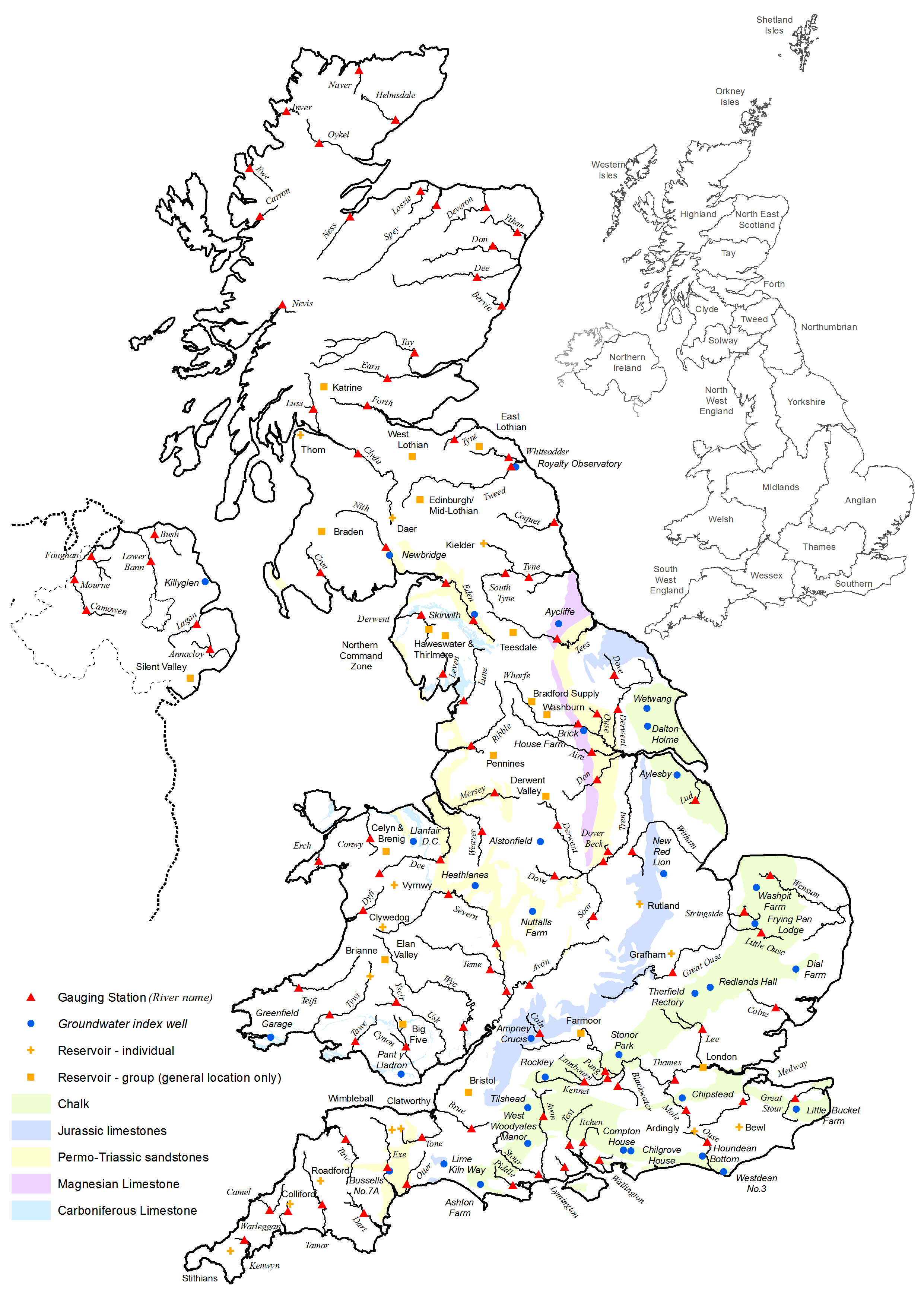