Almost 1500 discrete river systems, comprising over 200,000 km of watercourses may be identified across the UK but, in a global context, our rivers are mere streams - being characteristically short, shallow and subject to considerable man-made disturbance. River flows can typically range through several orders of magnitude and low flows tend to be very modest in most river basins. For this reason in particular UK rivers are especially sensitive to regime changes resulting from climatic variation or the net effect of a range of anthropogenic factors (e.g. heavy abstraction rates, major land use change).

Rivers are major agents of landscape modification and, in turn, are greatly influenced by the catchments through which they flow. Reflecting the very wide variety of climate and catchment types encountered across the UK, rivers range from mountain torrents draining headwaters receiving up to five metres of rain a year, to much more placid groundwater-fed streams in parts of the southern and eastern England where rainfall is an order of magnitude lower.

Relative to most parts of the world, UK river flow patterns are less dominatingly influenced by seasonal contrasts in rainfall or melt-water contributions. UK rainfall is, on average, fairly evenly distributed throughout the year with a modest tendency towards an autumn/winter maximum, particularly in western catchments. By contrast, seasonal variations in temperature and sunshine amounts ensure that evaporation losses are heavily concentrated in the summer half-year (April-September).  In turn, this imposes a marked seasonality on river flows with maximum flows normally in the winter and minimum flows normally occurring in the summer or autumn (note: urban catchments may not conform to this pattern).

In addition to climatic conditions the geological characteristics of individual catchments, their permeability especially has a major influence on river flow patterns. Figure 1 below shows daily flows for neighbouring catchments in the Thames basin. Although they experience almost identical climatic conditions, the flow regime for the Lambourn, which is sustained by outflows from the underlying Chalk, is markedly more stable than that for the Ock which drains a largely impermeable clay catchment – allowing more immediate response to rainfall events (see Figure 1). 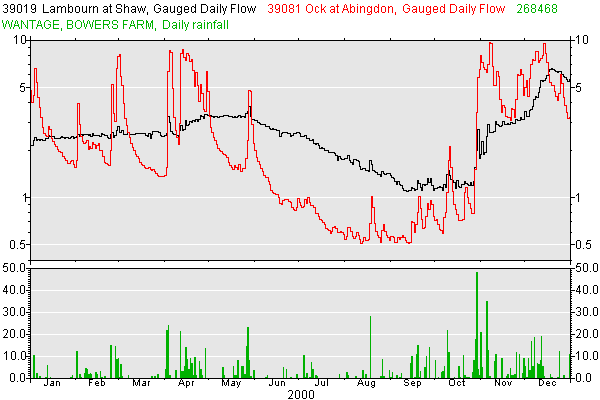 Figure 1. Differing regimes in neighbouring catchments (Ock and Lambourn) in the Thames

There are now a few UK rivers – certainly less than 15% – for which the flow regime can be considered natural. The need to drain the land, to protect it from flooding, to control the flow of water for water supply or hydropower, or to use the watercourses for navigation, fishing or recreation, have all imposed a change to a greater or lesser degree.

Changing the physical characteristics of the river – its width and depth – alters velocity and flow patterns. The latter can also be altered by land use changes (e.g. agricultural drainage, urbanisation) which may also influence the catchment water balance (e.g. through the different evaporative demands associated with different cropping patterns). Abstractions from rivers, or the groundwater which helps to sustain them, can lead to a substantial reduction in natural flow rates and a corresponding increase in hydrological and environmental stress, particularly in the drier parts of the country. On the other hand, low flows may be artificially enhanced (e.g. by reservoir outflows, groundwater augmentation or inter-basin transfers). One consequence is that trends in river flow over time may be more a reflection of artificial influences than changes in climatic conditions (see Figure 2).  This is illustrated in Figure 2 which shows that the long term decline in gauged flows for the Thames is reversed in the naturalised series (the latter taking account of the major upstream water supply abstractions to meet London’s water needs).

Figure 2. Comparison of annual 30-day minima, and change over time, on the Thames at Kingston within gauged and naturalised records